Church #19. Meet Lisa Kipp. She is an associate pastor at Zumbro Lutheran Church with specific responsibilities in missions and community outreach. Zumbro is in Rochester, Minnesota with an average worshiping attendance of 650 people a week.

Five years ago, Kipp and the missions team wanted to address ways to eliminate hunger in their neighborhoods. They took a two-step approach by first looking at the various ways Rochester was already providing food resources. Then they looked at the gaps.

What they noticed was that food outreach was happening primarily in the downtown area. The pockets of poverty in the outlying areas needed attention. They also noticed that there was a gap in evening meals being offered. To help determine their dream, Zumbro’s mission team began a partnership with another church, People of Hope Lutheran Church.

Together, these two churches decided to serve an evening meal in southeast Rochester between two mobile home parks. Their partnership grew to include Channel 1 Food Bank, City Parks and Recs, schools, managers of the mobile home parks, and the police.

Their decision to feed others has resulted in what Kipps calls, “building bridges of understanding and peace in the community.” In their first year, Zumbro and People of Hope averaged 230 meals each Thursday night. They serve warm burritos, and because of their partnership with Channel 1, supplements like yogurt, fruit, cheese and a cookie are always available.

In the fall of 2015, Zumbro raised $90,000 to celebrate their 150th anniversary and now has purchased a food truck. Kipp says, “I know more about licensed commissary kitchens and food standards than ever. It’s not something you learn in seminary!” 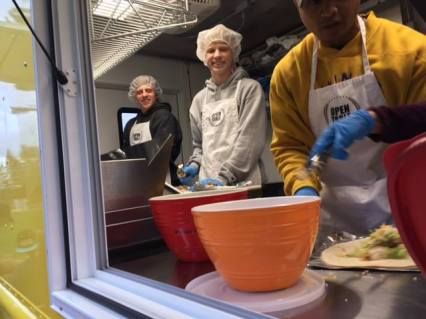 But they have a plan on how to develop the food truck ministry to move beyond their Thursday night routine. Their hope is that other churches in the area will venture in with them. They are looking for other people to help with Monday, Tuesday, Wednesday and Friday.

Kipp says, “Dream big. Dream big together!” Collaboration is the key in bringing big dreams to life. Working together takes an effort. It’s about putting personal agendas aside to work towards a greater good, collectively. And what results is something pretty cool. In this situation, people are fed.

Why does this food truck ministry matter? It matters because what Paul writes in Ephesians 2:13-14:

But now in Christ Jesus you who once were far off have been brought near by the blood of Christ. For he is our peace; in his flesh he has made both groups into one and has broken down the dividing wall, that is, the hostility between us.

The food truck ministry is about breaking down socio-economic walls or barriers. It is about rebuilding real community between the races, genders and religions. It’s about caring for others, no questions asked.

PS Each year KTTC and United Way of Olmsted County recognize ten individuals or groups within Southeastern Minnesota and Northern Iowa who have made an impact in their community through volunteering. This year Open Table was selected as an award recipient! Open Table volunteers and other recipients were honored on Wednesday, June 21, on the Rochesterfest main stage, and were spotlighted in a story on KTTC on June 19.

One thought on “﻿What Collaborative Ministry Can Do”