Church #7. Meet Anna Anderson. She is a solo pastor at Advent Lutheran Church in Arlington, Virginia. With 90 people who make Advent their church home, Anderson says that more than half of this congregation can be described as denominational-ly unattached. 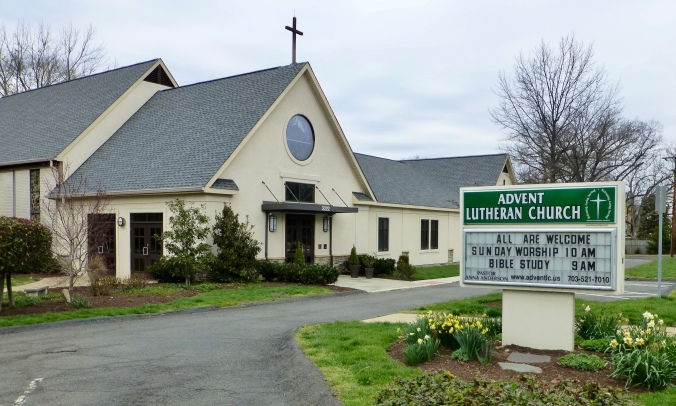 Located near the Pentagon, Advent is a “melting pot” worshiping community. Being comprised of international families from Taiwan, the Philippines, Tanzania and others, each Sunday is a cacophony of languages. She says, “It’s a true Pentecost experience during worship.”

To add to the mix, Anderson describes that there are basically two types of attendees at Advent. There are the “stay put” members, elders or the newly retired that no matter how the community has changed have stayed put. Then there are the younger non-member crowd, who are interns on the Hill and mostly transient.

“The trick,” Anderson says, “is figuring out how to pull these two groups together into one community.” She describes her work at Advent as “doing campus ministry”. Many people come to hear the Gospel preached and to join in the church activities. But they are not all necessarily members.

Campus ministry works along the same lines. It’s like a revolving door! People flow in, stay a little while, and then out of the ministry. With the population turnover at Advent, membership is not the goal. But they are big on belonging, albeit for a short time.

To meet the needs of the transient denominational-ly unattached, Advent has changed the rules so that everyone has a voice in leadership. (Yes, you read this right!) Not everyone on the council or in leadership roles are members. Each Sunday is a standalone Sunday. At Advent, sermon series or hymn of the month ideas don’t work because of the revolving door.

For some members who want to see a membership report and growth in numbers, this can be troubling. Anderson says, “My role is control the anxiety and the ‘what if’ questions.” She goes on to describe that reeling in the numbers is not preaching the Gospel. And for Anderson preaching the Gospel is her center role. She wants to help people get unstuck from this idea of membership – that everyone must be a card-carrying member – and move into celebrating new ways of belonging.

Why does this shift in understanding membership matter? It matters because of how Paul in his letters described the churches that he encountered on his missionary journeys. As a transient fellow himself, he roamed from Jerusalem to Corinth to Athens. Sometimes Paul was well-received, and sometimes he received pushback. But what he noticed is that if the Gospel was preached, people gathered. It’s in that gathering space where people belonged, encountered Jesus, and heard as in Ephesians 4:4-6: There is one body and one Spirit, just as you were called to the one hope of your calling, one Lord, one faith, one baptism, one God and Father of all, who is above all and through all and in all.” Notice what is not included in this list? Paul does not reference, ‘one membership’. It wasn’t needed. Only Christ.

For more information on this story, contact Anna Anderson at 703-521-7010 or adventlc@hotmail.com

3 thoughts on “Moving Past Membership”