Evangelism is a word not well-received these days. Translated from the Greek word, euangelion, which as I understand it means “good news” or “good tidings,” evangelism has in not so far ancient times beaten people over the head with Bibles, forced-believing. It’s no wonder why evangelism though has gotten a bad rap.

What do we do then to turn this word around? Well, we could start with a working definition on evangelism. Simplicity narrows it down to the announcement of the Good News of Jesus. Historically, evangelism has been done through word and action with messages about warnings, explanation of God’s grace and a call to repentance.

But as former missionary in Madagascar, I learned some practical skills about evangelism from my Malagasy colleagues. My experience taught me that at the center of evangelism is mindfulness. This is the practice of being fully present in your surroundings, who you are with, and what you are doing. Concerning evangelism, mindfulness means to acknowledge people as children of God, to look them in the eyes, swap stories and most of all to love them.

I was reminded of this concept – evangelism as mindfulness – this past Sunday when we learned the story about Lazarus and the Rich Man. My colleague, Pastor Karl Jacobson, preached on the story. He explained, in my own summation, that the point of the story was a call to reflection and a call to action.

During his sermon, Karl held up two signs made by homeless people. He explained that he along with his son went out to the intersection of Snelling and University in St. Paul, MN. There, they talked to several people who were homeless.  Afterwards, he asked if he could buy their signs and share their stories. Through these signs, the congregation heard about these two people who had fallen on hard times. But by reflecting on these signs, the congregation was then challenged to do the same thing on our own street corners.

Sunday School kids, the same Sunday as Karl’s sermon, were sent out to the coffee shop. As the 3rd-5th graders sipped hot chocolate and colored little cards that said – “Spring is on the way! Have a nice day!”  – they talked about mindfulness with their teachers. But it is what happened next that was amazing. The kids were instructed to give their card away to a stranger. The first step “to say hello” was the hardest. But with the support and guidance of gifted Sunday School teachers, the coffee shop was buzzing with their version of good news. The appreciation was remarkable. Several non-English speakers said that “they would never know how much their reaching out meant to them.” One woman in a wheelchair said that she was pleased to be remembered. And servers were happy to be counted among the loved. 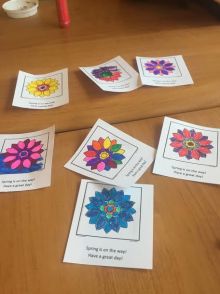 We need to start seeing that mindfulness is evangelism. It’s a step that many miss thinking that the word of God needs to be shoved down the throats of non-believers. But that has never worked. Instead, evangelism – the gospel of God’s love for world – works best when we know our surroundings, meet people eye to eye, lean in to learn and listen to people stories, and show love in the simplest ways. If a third grader can do it, so can we.

One thought on “Evangelism as Mindfulness”