Baptism, for Lutherans, is where our relationship with God begins. In it, we receive the gifts of the Holy Spirit and faith. But most importantly, we become brothers and sisters in the family of God. Many people over the years have asked me about this God we now call parent. They remark about how this God the Father of the New Testament is so different than the God of the Old Testament. To which, I respond with “How?” I’ve gotten answers all over the map – wrath, anger, destruction. Now, I don’t really know best answer to that question but here is my attempt.

God’s deepest desire, I think, is to be in relationship with God’s people – to love us. That’s how the Old Testament works. Over and over again, God tries to to connect with God’s people. It shows how the problem is not with God but with God’s people. God gave the Israelites somewhere around 600 commandments to follow, but it was hard to keep them all. The commandments then whittled down to ten with Moses on how to live faithfully among God and neighbor; yet God’s people – then and now – brokr every single one of them. Prophets came and went to warn the people to repent. That’s even the first word out of John the Baptist’s mouth in this baptism story, “Repent!” The only thing left for God to do was to send God’s son into the world to save the people. To show God’s people just how far God would go to love! Jesus. God’s son, set the example for us to follow starting with his baptism. He then taught us many things including the greatest commandment, which is Love God, Love Neighbor, and called us into action with just two words: Follow Me! (But we know how hard that is do even with the gift of faith!)

My family and I tried this “Follow Me!” track as ELCA missionaries in Madagascar. We sold our stuff and lived almost 10 years on the island. One of my favorite memories is the baptism of our youngest son, Jacob. He was a chubby baby and barely fit the baptism outfit I had bought for him before we left stateside. It was not a typical baptism in the sense that we held it in the backyard instead of the church. We did this because of who we wanted present at the baptism, friends who acted like family! 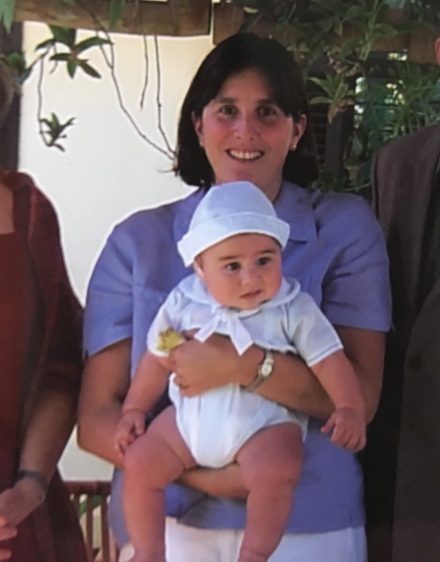 Our friends in the sleepy town of Mahajanga were a mix of characters. We had, of course, our Malagasy Lutheran counterparts at the baptism. An American Lutheran pastor colleague, who performed it. Some Norwegian missionaries living in town. We then asked some of the closest friends to be there – people from France, Chad, Brazil, and Martinique. It was in the moments of Jacob’s baptism that I realized what God had done. Not only was Jacob bestowed the gift of grace and love and Spirit and faith. But the gift of extended family gathered around him – God’s people from all over the world to celebrate his life found in Jesus Christ. This was evident by the end of the service. Like any baby, Jacob received a candle and heard the words of Matthew 5:16: “Let your light so shine before others…” But what followed was cacophony of languages that demonstrated this gift of relationship as a Malagasy colleague said, “Aoka hazava eo imason’ny olona toy izany koa ny fahazavanareo…” and a French friend told baby Jacob “Que votre lumière luise ainsi devant les gens…”

Jacob got to bask in the family of God that day and now belongs to God’s family forever. Through the gift of family, that starts with a love that fulfilled all laws, is one way of how God relates to us. We are loved by God not for anything that we have done. But because of who we are as God’s beloved, God will never let us go because of anything that we did or will do. That’s the promise. 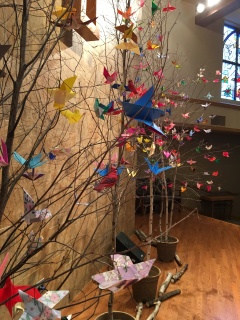 So to conclude my sermon today, I invited the congregation into a cross+generational art project. With their bulletins, each person received a origami dove. The folded doves were made by the confirmation students on Wednesday night as they talked about what it means to be a part of the family of God. The congregation was asked to write the first names of family members, friends, or even acquaintances on the doves  – names of people who they have seen the light of Christ shine through and within. Once done, they brought the doves forward to hang in the trees.

The 14 feet barren birch trees were covered with 300 doves today. Doves filled with the names of  people – who sat beside us or gone before us – that walk in faith with this congregation. People in whom Jesus shines for the world to see. So Why Jesus? Because Jesus is relationship – the one love who holds God’s family together.